ILMA of the Week: Antoni Gaudí

On this day in 1852, Antoni Gaudí was born. Ahead of his time and a genius of modernist architecture, seven of his buildings in and around Barcelona are listed as UNESCO World Heritage.

Smart cities use data and technology to create efficiencies, improve sustainability,
create economic development, and enhance quality of life factors for people living and
working in the city. It also means that the city has a smarter energy infrastructure.

Francisco “Patxi” Mangado, the 54-year-old Spanish architect, compares his bronze-clad Archaeological Museum of Álava in Vitoria, Spain, to a “coffer guarding a treasure.” He has developed this apparently simple conceit at a number of different levels in the work, so that it acquires a sensual resonance that reaches beyond words to convey his poetic intent.

The architect uses the contrast between the building’s bronze and glass skin and its setting within Vitoria’s medieval core to further develop his evocation of archaeological layering. A quiet city of 230,000, Vitoria is the capital of the Basque region, with a rich history dating back to the sixth century AD. The museum, a mixed concrete-and-steel-frame structure, is part of an ongoing effort by local authorities to rehabilitate the medieval center, which has been in decline through most of the 20th century. Located on one of its livelier streets lined with bars, old shops, and a few monumental buildings, the museum adjoins the 16th-century Bendaña Palace. In 1994 the palace was renovated to house the Fournier Museum of Playing Cards as the town’s homage to a well-known local industry. The two museums now share a common entry court.

Click here to read the rest of the article

City of Culture by Eisenman Architects

I love Architectural design theory and I love skate boarding; Peter Eisenman combined them both when he designed the 173-acre site on Mount Gaiás.  The project neighbors Santiago de Compostela where the cathedral houses the remains of the apostle St. James, brought to Spain from Jerusalem after his death in AD 44. Since the eighth century, pilgrims have trekked to the medieval town to pay homage to his shrine. 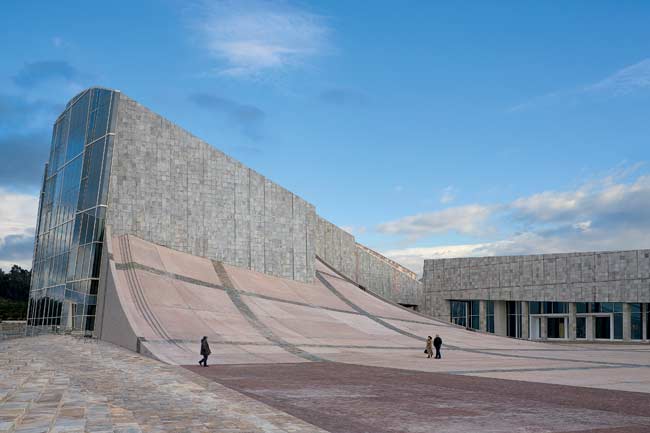