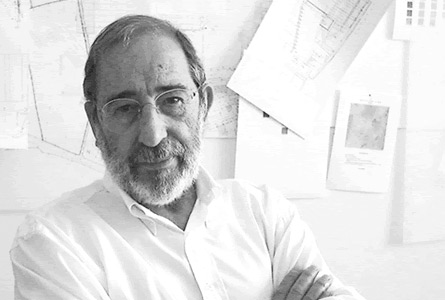 Broadly and variously defined, Postmodernism refers to a specific period of time that began in the 1940s, a style of literature, architecture, art philosophy, or the plight of Western society in post-capitalist age.  This movement encompasses a set of critical and rhetorical practicesemploying concepts such as difference, repetition, and hyperreality to break apart or deconstruct other the structural elements achieved through modernism, including temporality, presence, identity, historical progress, epistemic certainty, and meaning achieved through unity.  For more information on Postmodernism, please click here.

He graduated in architecture in 1955, at the former School of Fine Arts from the University of Porto, the current FAUP – Faculdade de Arquitectura da Universidade do Porto. He completed his first built work (four houses in Matosinhos) even before ending his studies in 1954, the same year that he first opened his private practice in Porto. Siza Vieira taught at the school from 1966 to 1969, returning in 1976. In addition to his teaching there, he has been a visiting professor at the Graduate School of Design, Harvard University; the University of Pennsylvania; Los Andes University of Bogota; and the École Polytechnique Fédérale de Lausanne.

Along with Fernando Távora, he is one of the references of the Porto School of Architecture where both were teachers. Both architects worked together between 1955 and 1958. Another architect he has collaborated with is Eduardo Souto de Moura, e.g. on Portugal’s flagship pavilions at Expo 98 in Lisbon and Expo 2000 in Hannover, as well as on the Serpentine Pavillon 2005. Siza’s work is often described as “poetic modernism“; he himself has contributed to publications on Luis Barragán.

Most of his best known works are located in his hometown Porto: the Boa Nova Tea House (1963), the Faculty of Architecture (1987–93), and the Serralves Museum of Contemporary Art (1997). Since the mid-1970s, Siza has been involved in numerous designs for public housing and universities. Most recently, he started coordinating the rehabilitation of the monuments and architectonic heritage of Cidade Velha (Old Village) in Santiago, an island of Cape Verde.